This is the first post in a series focused on trying to analyze the contents of a collection of preprint papers on a topic – in this case, depression. This post involves how I scraped the (initial) website, along with some analysis of basic information from the descriptions of the preprints.

The OSF (Open Science Foundation) is project by the Center for Open Science, dedicated to aggregating the results of multiple arXiv-like preprint services and making them searchable as a group. As a result, it makes for a potentially interesting jumping off point to get preprints from a number of different sources.

The interface for the search is pretty standard, and the site returns abstracts and other basic information on the preprints themselves, along with links to the preprints on their respective sites. 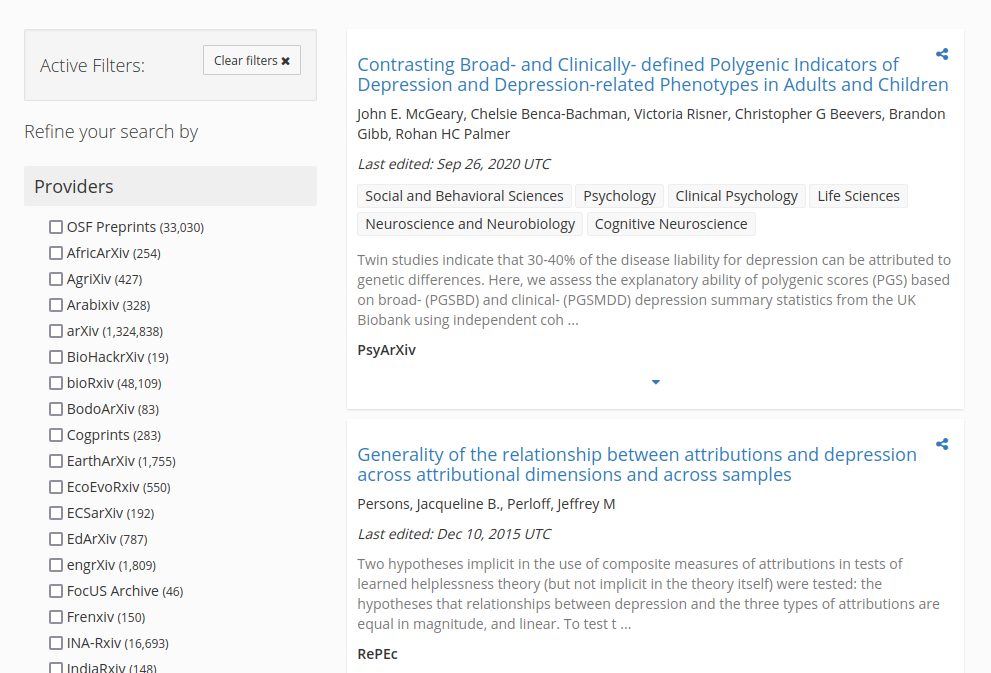 The data in these summaries is pretty well-structured, so getting the information out of the respective elements with BeautifulSoup isn’t too bad. That said, the returned results are rendered with JavaScript, so you need to render the page fully before scraping it. As a result, we also need Selenium to fully automate the process.

Identifying the pages is fairly simple, all pages of the search can be accessed via a URL of the form https://osf.io/preprints/discover?page=XXX&q=depression. Getting the number of pages returned in the search is necessary, but this is fortunately included in an element at the bottom of the page.

We also need to extract the information of interest from each result: the title of the preprint, the URL to its location, the date of the last edit, the categories that the preprint is labeled with, and the name of the source which is hosting the preprint. The search results are almost totally consistent – the only exception is that some preprints are missing URL links, but those can be detected by checking for the presence of an <a> element in the title element.

Putting this all together is fairly simple:

At the time of running this, there were 443 search pages to scrape. I added a delay as I didn’t want to hit the OSF site too heavily with search page requests, so it took about 40 minutes to complete this.

From there, we can convert the list of named tuples to a dataframe, save those results, and then shut down the Selenium browser.

The returned data consists of 4,414 preprints and their accompanying information. Unfortunately, almost a thousand are duplicates, though there are still plenty to look at:

This is easily done:

I’ll set aside the sources with fewer than 100 preprints just due to size. Among the remainder:

As a side note, something largely missing from these titles is the matter antidepressant drugs and other pharmacological topics. I would guess that it’s the result of some level of sampling bias, rather than an accurate cross-section of depression research as a whole.

Investigating common elements of the titles could be illustrative as well. Examining the stems of the words is probably more useful than checking the words themselves – for example, separate counts of “depression” versus “depressive” versus “depressed” wouldn’t add much useful information than just the “depress” root.

The above function is just used to turn a list of preprint titles into a list of word stems. The code below does this for each of the six preprint sources mentioned above, and determines the 15 most common stems: 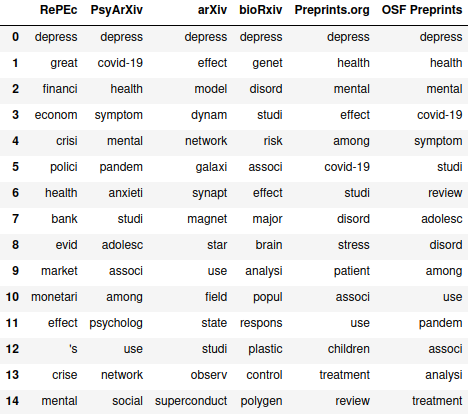 Unsurprisingly, “depress” is at the top for all six sources. As you could probably guess from the sampling of the preprint titles earlier, RePEc’s stems are more economics-focused, arXiv is kind of a mixed bag (and isn’t really anything we’re looking for), and the other four are focused on the psychological condition, with bioRxiv focused more on the biology and genetics perspective. Interestingly, COVID-19 actually ends up as the second most common stem in PsyArXiv’s articles and well inside the top 15 for Preprints.org and OSF Preprints. Checking how many times they appear:

The term “covid” appears in 149 PsyArXiv preprints, which is a little over one-fifth of their preprints in the search. For Preprints.org and OSF preprints, it’s just over one-eighth. It’s interesting to me that the second most common stem for PsyArXiv preprints only appears around 21% of the time – I’m not sure if that’s exceptional or not.

To start this off, I know from looking around at the OSF’s search portal that there were a number of preprints which did not have any categories at all. It actually turns out that the majority of them lack categories:

The primary offender here seeps to be RePEc:

On the plus side, since PsyArXiv and OSF preprints have categories for all their preprints, economics topics don’t end up in the most common categories (though it looks like one topic from arXiv sneaks into 15th place):

Question 4: How are the “last updated” years distributed?

Finally, the question of how the preprints are distributed in time. A basic check of the year reveal that there hasn’t exactly been a steady increase:

There’s a peak in 2016, which no year before or since (or so far, in 2021’s case) has matched. I’m not really sure when some of these preprint services took off, so it’s hard to tell exactly what’s driving this. Looking at a cross-tabulation of the six sources we looked at before versus year: 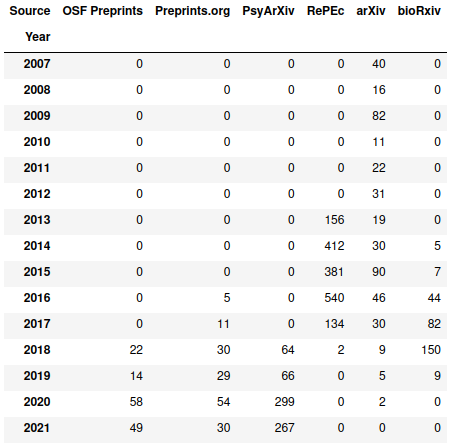 So basically all of the spike appears to come from RePEc. It’s interesting that it seems to cut out after 2018 – a bit of searching on their site turns up many more results, although a spot check suggests that at least some of those just have “depression” as a word in the text instead of as a focus. There seems to be a similar situation with bioRxiv. From 2019 onwards, PsyArXiv, OSF Preprints, and Preprints.org seem to be the only real sources.

The above table in graph form: 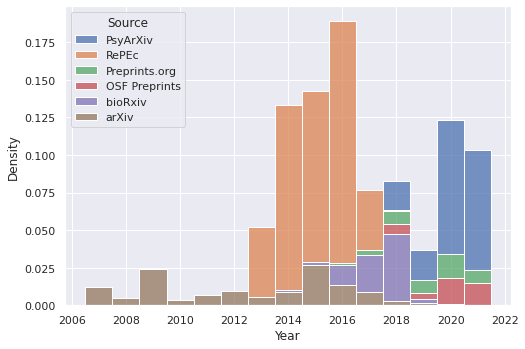 The next part is going to be focused on looking at information from the preprints themselves, and potentially diving a bit more into the preprint collections. From the look of it PsyArXiv is going to be the primary source, but bioRxiv, OSF Preprints, and Preprints.org may provide some interesting supplemental material.